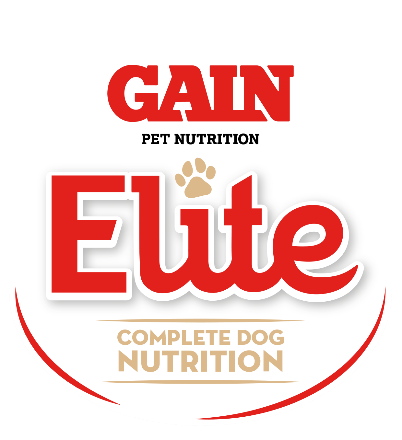 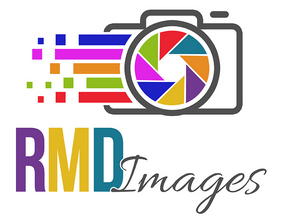 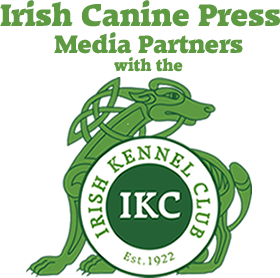 It was a happy return to Clonmel Ch Show yesterday, as it hailed the start of the week’s festivities of ‘The Circuit’, for decades the height of the Irish show season and so popular for folk from all over these islands to meet up and share the craic for a full week of shows, sightseeing and sharing news.

So, a good entry for Clonmel, held for the first time in three years, having missed in 2020 and 2021, due to Covid, and they also hit a heatwave such as has not been in Ireland for many, if any years we can remember, though I personally recall days in between shows spent swimming in the Atlantic waves off Banna Beach later in the week when we had all settled in at HQ, then in Tralee.

Margaret Conran O’Gorman, longtime secretary of Clonmel & District Canine Club, called in the ten Group winners to the spacious main ring for Best in Show judge, Madelene Rainey, herself fresh from hosting Coleraine Ch Show just the previous weekend, to crown the 2022 Clonmel Best in Show winner, launching the beginning of the Circuit proper for this year, with GAIN Pet Nutrition returning too as the generous show sponsors the stand manned as ever by Sean Martin, with the familiar faces of Adrian O’Keeffe and Jim Treacy on board too.
Photos: Caroline Reynolds
Report: Joyce Crawford-Manton
Irish Canine Press & RMD Images 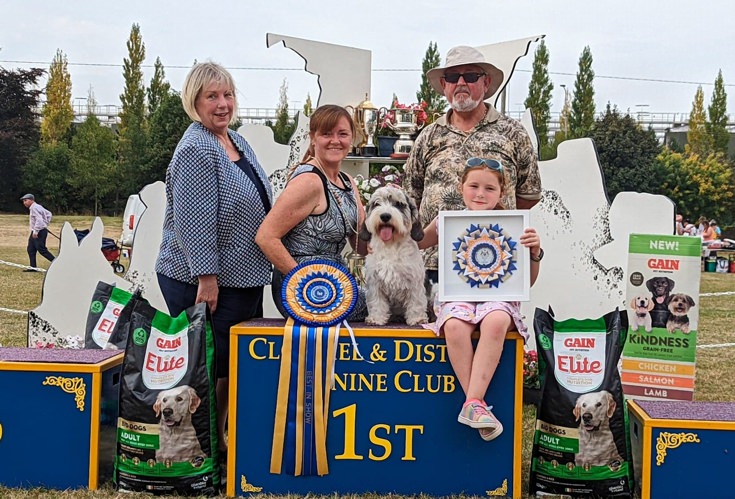 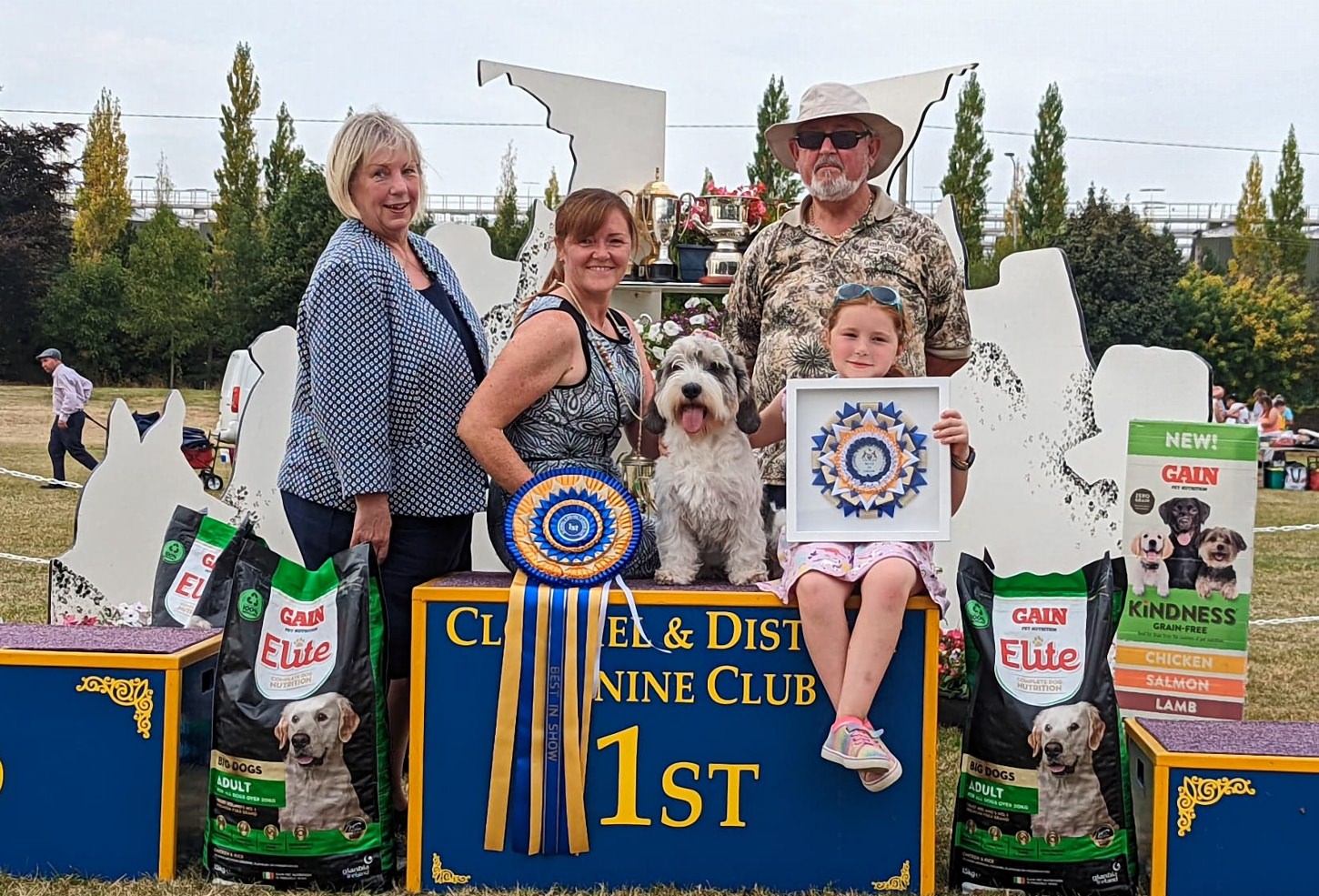 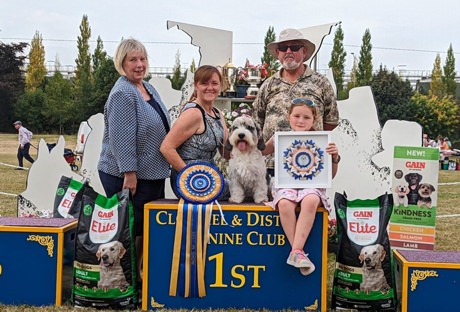 Out of the quality line-up Madelene finally chose for her winner the Petit Basset Griffon Vendeen, Ch & GB Ch Soletrader Pat On The Back, taking his second BIS at successive shows entered, and piloted sympathetically by his co-owner, Cathy Collins-Neill, also thrilling owners Oliver and Erin, son and daughter of breeders Sara and Gavin Robertson.  Just two weeks ago he was Best in Show at Dun Laoghaire Ch Show, held in the lovely setting of Oldbridge House, under this writer, and I was really taken by his great ring presence, sound and stylish movement, lovely breed type and that mischevious twinkle in his eye !!  Pat has become quite a winner since his debut in Ireland at St Patrick’s Day, back in March, where he took BOB and Group 2nd, winning the Group the following day at IKC St Patrick’s International going on to win twelve Green Stars, eleven of those with BOB, eight Group 6 wins, the first of his three BISs was at Kilkenny,  two Reserve BISs at Mid West and CCC National, and a BIS third at Fermoy International. He had won the group at Portadown, but withdrew from the group in a very sporting gesture as the cross channel BIS judge was good friends with his breeders. Clonmel saw him winning both the breed and Group 6  under Lynda Cuthbert Matthews before taking the accolade under Madelene. These latest wins setting him up for not only top Group 6 on the GAIN/IRISH CANINE  PRESS Top Winner’s Leaderboard but takes him currently to Top All Breeds. Across the water, he now has 5 CCs and three group placings, so quite a CV for a little dog with a big personality and attitude, a total showdog and not yet three years old. He is also the very best friend of  certain young lady called Grace Collins who is in the photograph along with ‘Pat’, her Mum Cathy, judge Madelene Rainey and Sean Martin of sponsors, GAIN Pet Nutrition. 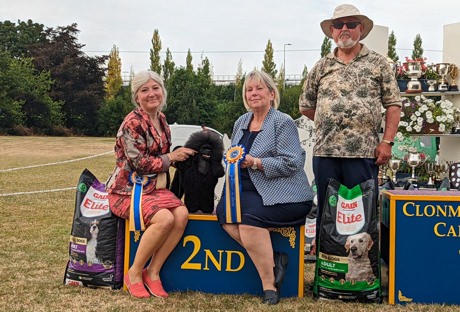 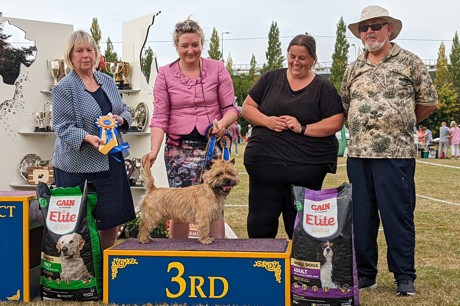 Reserve BIS under Madelene was another not unfamiliar with top honours, the precocious little Toy Poodle, Ch Grayco I Zadorable, owned in partnership wit breder Lesley Howard, Mary Coghlan, and Sally Burns who prepares and handled him.  ‘Iza’ was Group 9 winner at CCC International and took the Group and Reserve Best in Show at Fermoy Int., she has had group placings at five other shows to leave her with the points to stand 2nd in the GAIN/IRISH CANINE PRESS Top Winners G9 Leaderboard. Having won Best in Show the previous day at the All Ireland Toy Dog Goup 9 speciality under Aleksander Petrovic, sent in by breed judge Angel Sotoca Santos, from Madrid.  ‘Iza’ was to meet Aleksander Petrovic, Poodle and Shar Pei breed specialist from Belgrade, again next day at Clonmel as he was the breed judge that put her through to win the Group under Irene Grant. It was also good to see co-owner, Mary Coghlan there to share the celebrations.

For her third Best in Show rosette, Madelene chose the smart little Cairn Terrier, this a breed which seldom reaches the pinnacle of the group for some unaccountable reason. Owned and bred by Leanne Alexander, GB Ch Coharra Be More, another not yet three years old and having, like the winner and Reserve, spent his Junior and Intermediate classes languishing at home due to covid, proved to be the one to put the breed on the map with it’s highest result for quite some time, and he is now sixth on the G3 GAIN/IRISH CANINE PRESS Top Winner’s Leaderboard having also had a Group 3rd at Newtownards. Angel Sotoca Santos, Spanish terrier specialist, was the breed and group judge who sent him through to the main ring. It was Paula Hamilton who handled ‘Sid’ to his successes on the day for Leanne, so there were smiles all round for Sid’s successes at home to add to his four CCs, all with BOB under KC London rules. Sean Martin represents sponsors, Gain Pet Nutrition in the photo which also features BIS judge Madelene Rainey, Leanne and Paula.

Fourth BIS went to Grainne Keeling, wth her homebred Alaskan Malamute, Ch Kishdigra Smooth Operator, currently fourth on the well contested Gain/ICP Group 5 Leaderboard, with points gained from group placings at Celtic Winners, Mid West, South Tipp and Newtownards as well as a previous win and BIS fourth at Portadown. Clonmel saw him win BOB under Paul Scanlon who later gave him his group win and thus his ticket to the big ring.